a few weeks ago i got an email from something called “new song music” that said i was a winner for some kind of song contest. at first i thought it was spam. then my wife rachel started whooping and hollering and told me that she secretly submitted my song [what i hope] to this contest.

turns out it won me a spot as an early bird finalist along with another musician, sarah donner, in the tenth annual mountain stage new song contest. my first reaction was, “no way…i don’t want to be in any battle of the bands type contest. i don’t even know how to play my songs”. rachel told me that i should check it out before deciding no.

so i checked it out, and wow…this is a pretty super honor to be selected. the final contest will be held in new york city during the cmj festival in october 2011. the winner from last year, amber rubarth, was given a performance on npr’s mountain stage and a record recorded free of charge with grammy award winner jacquire king (record producer for tom waits, modest mouse, kings of leon, mutemath, cold war kids, norah jones et al.). whoa. i guess i will give it a try! now i just have to figure out how to play music live. 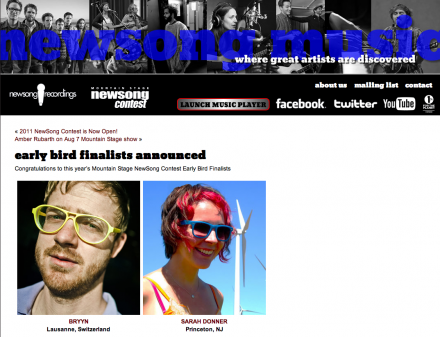